Failed Christmas Project: Making a snow globe and the many challenges that came with it

I sometimes buy things not knowing what I’ll do with them. Case in point: An empty snow globe I bought at Hobbycraft a week before Halloween. I decided to leave it off to one side until I figure out what to do with it. Half a month later I was tidying up my shelves and figured I’d put it on my desk and see what I’d do with it. I’d been learning electronics for about a month and wanted to see what I could do with what I’d learned, so I went with a classic: A Christmas tree covered in snow, which flashes when I shake it. In the end the project failed, but as I always say: The cookie dough always tastes better than the cookie! So without further ado, the failed snow globe!

Most snow globes have plane shells, but I always thought this looked weird. I mean if the shell is the firmament of the snow globe, then it should look like a sky. I used a cotton bud to paint the craters of the moon in glue, then cover them in dark grey glitter.

I waited for this to dry, then used a stippler to paint the rest of the moon in glue, then used the cotton bud to paint the stars in glue. I poured in silver glitter and shook it. I cleaned out the excess glitter with a blast from my compressor.

The model consists of three parts:

I then created “baubles” using fishing line looped through each layer, then double looped through a bead, and crimped. This was done in a semi-random arrangement. I wrapped LED string lights around the tree (after folding them to make them look bulkier and more condensed). At first I planned on covering them in glitter to make them look like tinsel, but the copper colored wires looked appealing enough for me to just wrap them around; I did this twice in opposite directions.

The gifts were made from polymer clay. This was my first attempt at using polymer clay, so I experimented fairly widely with this. I came up with these five gifts, but decided to only use four of them.

There’s only three here, but you’ll see the other one in the later image

The snow was made from a mixture of white sand and pearlescent glitter. Some of it was glued down, while the rest was left to move freely in the globe. Since this is a dry snow globe the snow didn’t float particularly majestically.

As mentioned before, I’d been learning electronics for about a month, so I needed to do quite a bit of research to figure this one out. Let’s start with the facts:

I knew I needed an astable multivibrator; such a circuit uses switches between two sides regularly and predictably, as well as being very easy to construct.

A shake switch would not permit for this alone. The issue with a shake switch arises from the mechanism of its operation. I’ve drawn up a diagram (not to scale) in FreeCAD to demonstrate the inside of a shake switch.

The red and blue areas are the positive and negative terminals respectively, while the pale blue is hollow acrylic casing, and the grey is a metal spring with a weight on the end. The metal spring is only secured to the negative terminal and is free to bounce, but is constantly suspended away from the positive terminal by tension. When shaken the weight shakes on the spring and collides with the positive terminal closing the circuit and allowing a current to flow. Because it relies on this chaotic event, the collisions are often brief and unpredictable, meaning they cannot be used to light LEDs as the circuit remains closed for too short a period to be noticeable and they would only flicker wildly if they are lit at all.

My salvation came in the form of the 555 timer in monostable mode. The 555 timer is by far the most important IC for any electronics hobbyist to learn to use. In monostable mode, it is triggered by a drop in voltage (no matter how brief), and releases a pulse for a period of time defined by the value of an external capacitor, during which time the triggering aspect of the IC switches off. Of course, it would be unwise to use this released pulse to directly power the astable multivibrator, instead using a transistor to simply switch on power to the next part of the circuit. 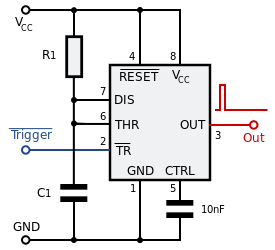 I prototyped this on a breadboard, and it worked pretty well. Here’s a picture of the (somewhat messy, but hopefully easy to follow) board I created (this was sent to my buddy Heinrich on WhatsApp, so it might be a bit fuzzy):

This is the diagram I used to construct the circuit on the perforated board. It doesn’t use standard circuit conventions:

I identified the positive and negative of the LED strings using a breadboard, and wound the two negatives around each other to identify them later.

Since this was my first time wiring on a perf board, it took me three attempts. Every time I fixed part of the circuit, another would break, and when the wires snapped INSIDE the snow globe I decided it was too much! I may do a later post analyzing the perf to see what went wrong, but the point is that we couldn’t get any flashing lights!

My attempt to salvage:

The main reason I went with the design of a dry snow globe was because I had no way of isolating the electronics. Now that the electronics had failed, I decided to give it a go! What can I lose? So I emptied the sand, blasted out the last of the glitter with my compressor, then varnished the living hell out of it and filled it with water. It seemed to have worked alright but I left it until the morning to see if any of the materials would leach into and affect the water clarity. Unfortunately this is what I was left with:

Was this project a failure?

There’s no short way to answer this question. I’d be lying if I said I wasn’t disappointed with the outcome, but I learned so much:

So why was the overall project unsuccessful? Well, there’s a range of reasons. For one I overwhelmed myself with too many unfamiliar tasks; it was unwise for me to balance the whole project on things I barely understood or had any practice in! Another major reason was the time period I gave myself; I started the project in mid-November and gave myself until Christmas day to complete it. There is such a thing as TOO MUCH TIME! By the end of the project I had lost all interest and was only progressing in it when I had nothing else to do. Because of this, the project also lacked sufficient flow for me to remember my exact place when I would return to it.

So what can be learned? Don’t use a project to learn too many new skills at a time, and there is such a thing as too much time. Gradually increase the difficulty of your projects, and set yourself short deadlines! I hope to revisit this project in future, but in the meantime I’m bored of snow globes!